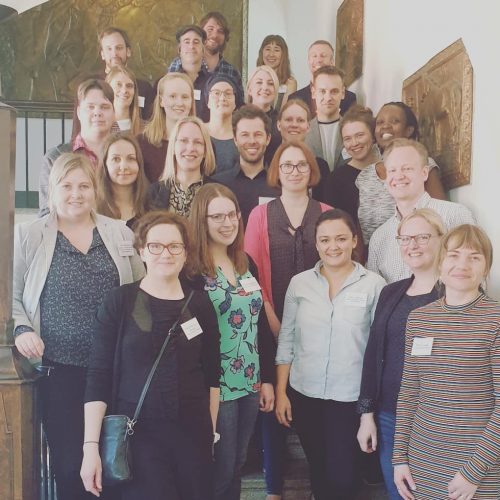 Young Academy Finland organised the European National Young Academies’ Meeting (ENYA) in Helsinki, on 17th-18th May, 2019, just ahead of the Eurovision Song Contest and the EU Parliament elections. The young academies wanted to improve their collaboration and coordination at the European level. To this end, the organisers of the previous and the next annual meetings will be working closely together to facilitate the European network also in between the meetings. The next meeting will be organised by the German Young Academy in 2020, and the network’s activities will also continue to be supported by the secretariat of the Global Young Academy (GYA) .

The two-day meeting took place at the House of Science and Letters, and was attended by delegates from 15 academies. The previous European young academy meeting had taken place in Amsterdam in 2018. On the first day, there were two panel discussions. The first panel discussed the nexus of research and political decision-making, and was chaired by academy secretary Päivi Tikka from the Council of Finnish Academies. Other panel members were professor Jaana Bäck (University of Helsinki), MEP Sirpa Pietikäinen, and executive director Outi Silfverberg from the Forum of Environmental Information. The panel focused on the politicians’ need for reliable information to support their decision-making. It can be difficult for politicians to find experts, and in the cases where experts’ opinions might differ, it would be important to understand why. The FEI study had showed that for politicians, media is the main source of research findings. Sirpa Pietikäinen suggested that we need a “Tinder for politicians and researchers” to help connect the two.

The second panel’s topic was open science. Open science has recently been on many academies’ agenda, not least because of Plan S. In the panel, headed by the chairperson of YAF, Tommi Himberg, we heard the president of Eurodoc, Eva Hnatkova, professor David Budtz Pedersen (Aalborg University), and director of research, Kalle Korhonen (Kone Foundation). The discussion focused on how the prospects of open science look different depending on the field of research, and what impact adopting open science practices should have on research assessment.

At the end of day one, delegates could relax in Uunisaari with dinner, sauna, and swimming in the sea!

The second day was kicked off by a “World Café”; a series of group discussions on best practices of the young academies. Many ideas for future collaborations were formed and many lessons were learned about e.g. how to fundraise, and how to organise outreach projects and events that combine art and science. The second day was also dedicated to discussions about the future of the network, and collaboration especially in the field of early career researchers as knowledge brokers. This conversation followed Katri Rostedt’s presentation on YAF’s new project on the topic, funded by Tiina and Antti Herlin’s Foundation. All european national young academies will be asked to contribute to the project.

The annual meetings of ENYAs will continue next year in Germany, as Die Junge Akademie promised to host the next meeting, as part of their 20th anniversary!