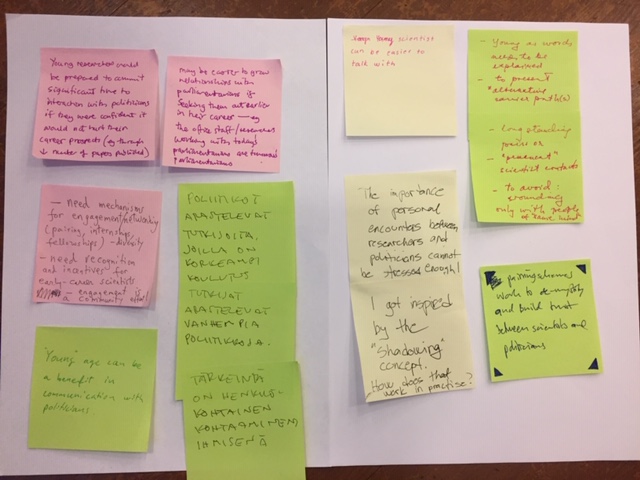 Young Academy Finland held the second facilitated workshop of “Young Researchers as Knowledge Brokers” -project as part of the Future of Science Advice in Europe -Symposium in Helsinki. YAF workshop was titled as “Innovative Approaches to Science Advice”, and it presented innovative best practice examples from the European young academies on building connections between young researchers and policymakers. To give workshop participants something new to be added to their tool box, we also had a demonstration of a new dialogical discussion method called ‘Timeout’, developed by Sitra.

The “Future of Science Advice in Europe” symposium gathered around 150 science advisors, government officials, researchers, politicians, academy representatives and members of the public to discuss about the role of scientific evidence in governance. The symposium was co-organised by SAPEA (Science Advice for Policy by European Academies), the Finnish Academy of Sciences and Letters and the Academy of Finland. It was hosted by the Office of the Prime Minister of Finland.

After the keynote lectures on the Finnish and European Science Advice Ecosystems, the symposium hosted several simultaneous workshops. Young Academy Finland’s workshop was one among these. We can confirm basing on our Young Researchers as Knowledge Brokers -project that many of the European Young Academies are using multiple models, or practices to build trust, connections and networks with national or European decision makers. Some examples on different ways to build connections are for example Pairing Schemes, Leadership -programmes or co-productive models to write topical knowledge synthesis reports. We have learned, that many of our European sister organizations feel that the plurality of ways they connect with decision makers helps them not just to grow future science advisers, but also to give stronger topical science advice. In order to underline the need and usability for these new approaches as part of the more traditional science advice practices, Young Academy Finland had invited our European sister organizations, Young Academy of Sweden and RSE Young Academy of Scotland to share few of their actions as best practices.

We also wanted to give our workshop participants a short introduction to a new dialogical discussion method called Timeout. Through the facilitated Timeout demonstration we were able to increase our understanding on those mechanisms that connect researchers and decisionmakers. We also demonstrated that Timeout method is one possible tool for dialogical discussion (between researchers and decisionmakers and society at large). After our workshop participants had heard the best practice examples from Sweden and Scotland, we asked them to elaborate their own experiences: why should young researchers be taken into account as science advisors? How can we strengthen the ability and will to engage in societal discussion?

The workshop participants told basing on their own experiences, that being ”young” can be a benefit while interacting with decision makers:

Every workshop was also asked to compile its recommendations for the future actions concerning science advice and its Finnish and/or European mechanisms. The recommendations of the Young Academy Finland workshop were:

1.    In order to ensure the plurality of voices of science advice and the training of future science advice leaders, young researchers of Finland and Europe should have a recognized, supported and formal role in the science advice mechanisms (of Finland/Europe).

2.    Future science advice mechanisms should take into account the plurality of the tools that can be used to legitimize the position of science advice in the society.

Young Academy Finland’s (YAF) “Young Researchers as Knowledge Brokers” -project, started in September 2019, aims ambitiously at developing new approaches for organizing the activities on science-policy interfaces. Project’s thematic focus is especially on those ways and solutions that would take the needs and situations of young researchers into account. Project also concentrates especially on EU member countries and on the EU’s decision making bodies. Project is funded by Tiina and Antti Herlin Foundation.